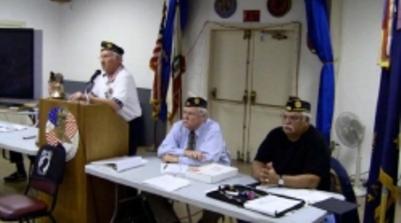 Flag Day Ceremony at Local Elementary Schools.  With the exception of this past year, Woodland Hills Post 826 has sponsored an annual Flag Day Ceremony at nearby Lockhurst Elementary School. The purpose of this ceremony is to provide students with a sense of history and honor for our country’s flag, and for the sacrifices of service that have been traditionally provided by our country’s Veterans. Post members attending the ceremony are typically invited by individual teachers to come into their respective classrooms and discuss their Veterans service with the children. 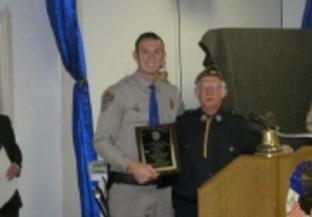 Canoga Park Memorial Day Parade.  Woodland Hills Post 826 has traditionally been one of the Veterans group participants in the annual Canoga Park Memorial Day Parade. In 2003, the Post received support and use of vehicles from the US Army Reserve unit in Van Nuys, and this has continued ever since. The Post typically wins the Veterans’ Color Guard trophy at the parade 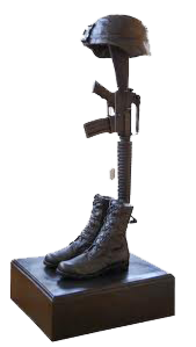 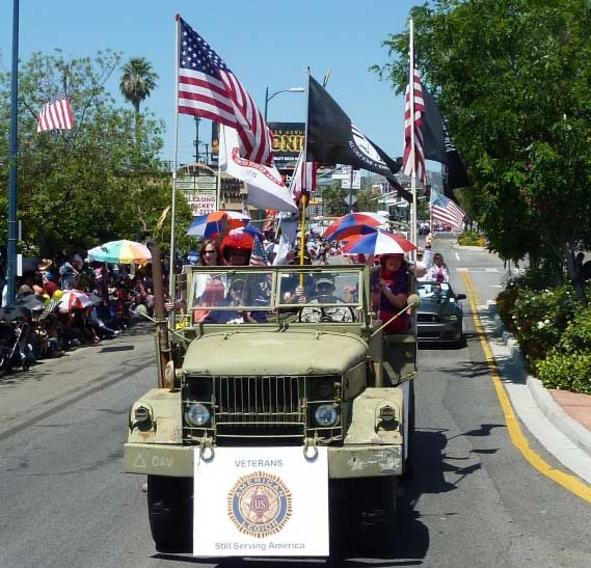 Visit our photo album and calendar for upcoming events 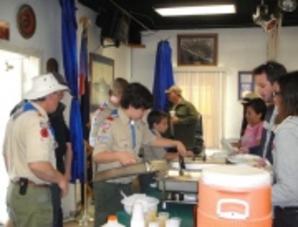 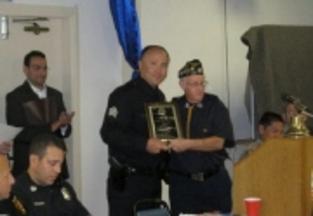 All these activities take three major resources to prove successful. The first resource is, of course, money. Our Post raises the lion’s share of funds needed to support our very active array of community programs.The second resource vital to our ongoing success over the years is the willingness and availability of our Post members as volunteers who donate their time to make our programs work. So far we have been most fortunate in having a strong core of active Post members willing to volunteer their time and skills. However, we are always in need of additional volunteer support, particularly at our weekly Friday evening Bingo sessions.Our final resource is the donations of our members and groups in the community. Our Post is a fully-qualified 501(c) non-profit Veterans’ Service Organization (VSO), recognized by the Dept. of Treasury and the Internal Revenue Service. Donations made are fully tax deductible. Donated funds are actively used to support the various Veteran and community-related activities outlined above.We have been an active participant in our community for over 60 years, and with generous donations from our members and others we plan to keep things that way.We trust that the information presented here has given you sufficiently good reason to be comfortable in renewing or transferring your American Legion membership with our Woodland Hills Post 826. Our activities in your community are obvious and of value, and supporting children, youth and our Veterans and their families are our highest priority. With 52 years of such service under our collective belts, our Post fully intends to continue its commitment in these areas for the next 52 years and more.Remember that there is no requirement that you take an active, hands-on roll in our Post activities. In fact, many of our members are employed full time, and find it difficult to actively participate on a routine basis. However, they do take advantage of supporting our efforts by becoming dues-paying and donating members, which allows their Post to continue functioning. We would very much appreciate your membership as a contributing member in sustaining our efforts.

Save the date for these special events 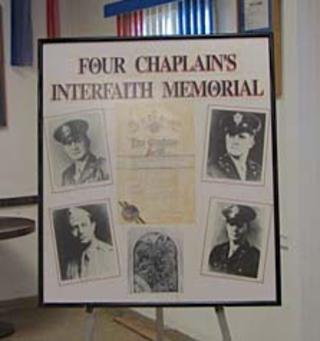 So, “Why should I join or transfer into Woodland Hills Post 826,” you may ask?

Here is a little bit about our Post, and our community and Veterans service, which should give you several good answers to this question and reasons to sign and mail your member data form transfer document today.

61-Year History.  First established and chartered in 1948, the Post hall building was officially dedicated in 1952. Once a stable and make-up room on the nearby Warner Bros. Studio lot in Woodland Hills’ Warner Center, the building was donated for use as the Post meeting hall by Harry Warner, and loaded and moved on a flatbed truck down Ventura Blvd. to its present sight at 5320 Fallbrook in 1951. Post members who had been meeting on the current Post lot in a white tent then named the “Woodland Hills Community and Veterans Center,” raised the funds to purchase the property through collection and sales of newspapers, raffles, garage sales and by soliciting donations from nearby businesses who’s owners were also Veterans.If you’re a long-time San Fernando Valley resident, or a student of Valley history, among those present the evening of the 1952 dedication was a “Who’s Who” of local LA and San Fernando Valley civic leaders: Then-LA Mayor Fletcher Bowren, LA County Sheriff Eugene Biscalauz, LA Police Chief Ed Parker, our local Congressman Joe Holt, and two contract actors from Warner Bros. Studios who had been directed to attend by Harry Warner: Vera Vague, a well-known heart-throb of the era, and her escort for the evening, one Ronald Reagan. The base of our Post flagpole includes a stone from each of the then-48 states, donated after members solicited the donations from American Legion Posts and the Governors of each State.

Valley Forge Teacher’s Education Program. Each year, many of the Valley’s American Legion Posts send grade school teachers to Valley Forge, PA to attend a program aimed at educating teachers concerning events surrounding the founding of our country. The intent is to provide teachers with more education and background on our country’s roots, so that they will be able to teach children in their classes. Woodland Hills Post 826 has traditionally been among the 25 Posts in the 20th District to send a teacher to this worthwhile educational program. 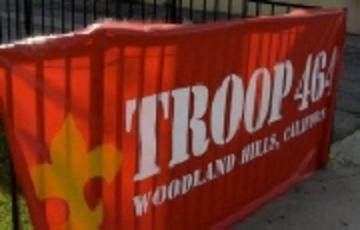 Community Service Activities. Woodland Hills Post 826 takes pride in its proactive stance as a member of the West Valley/Conejo Valley communities. Highlights of our community involvement and participation include: 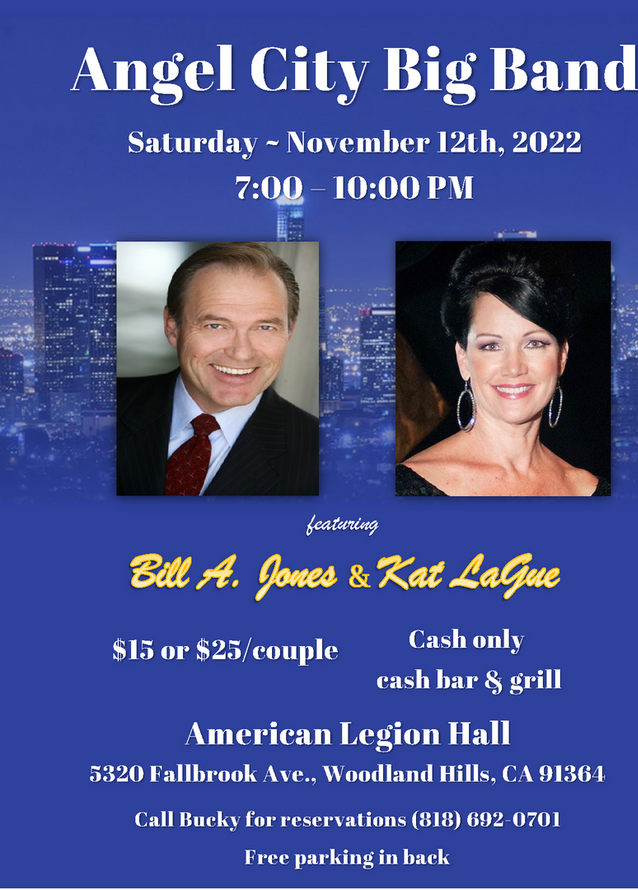 Four Chaplains’ Brunch.  Another tradition at Woodland Hills Post 826 is its annual Four Chaplains’ Brunch, typically held in early February, and hosted by a local Rabbi, Catholic Priest and two Pastors. This event is always a complete sell-out, and commemorates an event in 1943 when an American troop ship was torpedoed and lost in the North Sea where four chaplains (a Rabbi, a Catholic Priest and two pastors) gave up their own life vests to save their fellow soldiers. All four chaplains perished in the event, along with many hundreds of their fellow troops.

Membership. The Post now has over 460 dues paying members. Post members include a large component of WWII, Korea and VietNam Veterans, and a growing number of Veterans from Panama, Greneda, the Persian Gulf and Veterans still on active duty. (The Post pays the annual memberships of members on active duty with the military). The Post is actively looking to increase its membership among these latter, younger Veterans groups, since it is this group that will help the Post enter the 21st century in a meaningful way. 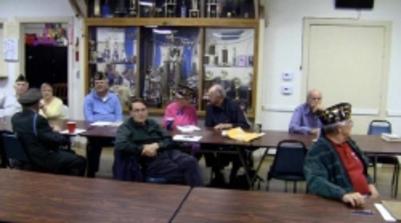 Law and Order Dinner.  Each year for the past 21 years, Post 826 has hosted its Annual Law and Order Dinner. The Dinner’s purpose is to provide a statement of formal recognition and community support for five (5) of the best of the following groups: A Police Officer from LAPD’s West Valley Station, a Deputy Sheriff from LACSD’s Malibu/Bell Canyon station, a Fireman from the LAFD’s Station 105, and a Highway Patrolman from the West Valley CHP Station. This is one of the Post’s stellar community events of the year, and we typically see the LA Chief of Police, LA City Councilperson and US Congressman in attendance.

Hospitalized Veterans (VA Medical Centers at Sepulveda and W. Los Angeles). One of our Post’s major continuing efforts is active support provided to Veterans hospitalized at Sepulveda and WLA facilities. The Post provides about $7,000 and literally thousands of volunteer service hours each year in directed support to Veterans being treated at these facilities. Much of the Post’s support focuses on providing hospitalized Veterans with the amenities of daily life (e.g., tooth brushes, tooth paste, wash cloths, mouth wash, etc.) which are in short supply from the VA, and in donating on-site Canteen booklets (for use in purchasing food items) to Veterans spending the entire day at the VA for testing and treatment.

Children and Youth in the community. The Post continues to support a variety of youth activities in our local community.

These include the following:

– Sponsorship of our own Boy Scout Troop 464. The Troop has 25-30 scouts, typically qualifies three to four of its members as Eagle Scouts each year, and is very active in the Scout community. The Troop’s Court of Honor Ceremonies are held quarterly at the Post hall.

– Active sponsorship and involvement with the Woodland Hills West American Legion Baseball        Team. The team, with players from nearby El Camino, Canoga Park and Calabasas High Schools, won the World Championship in 1989 (best of 5,000 teams nationwide) and nearly repeated in 1990 by winning the State Championship. The WH West team has proven to be routinely competitive, and has consistently reached the playoffs each year for 13 of the the past 15 years.

– Sponsorship of local high school students to the American Legion’s Boys’ State program. This has been a long-standing effort on behalf of our Post, with five to six students chosen and financially supported to attend this nationally recognized program each year. Some of the local high schools sending students include Taft, El Camino Real, Canoga Park, Faith Baptist and Chaminade.

– Sponsorship of local high school students in the American Legion’s Oratorical contest. Another of our Post’s long-time commitments, high school junior students have been sponsored almost every year for the past 25 years. Students speak on the U.S. Constitution, and have the opportunity to compete at the District, State and National American Legion levels for prizes totaling more than $25,000.